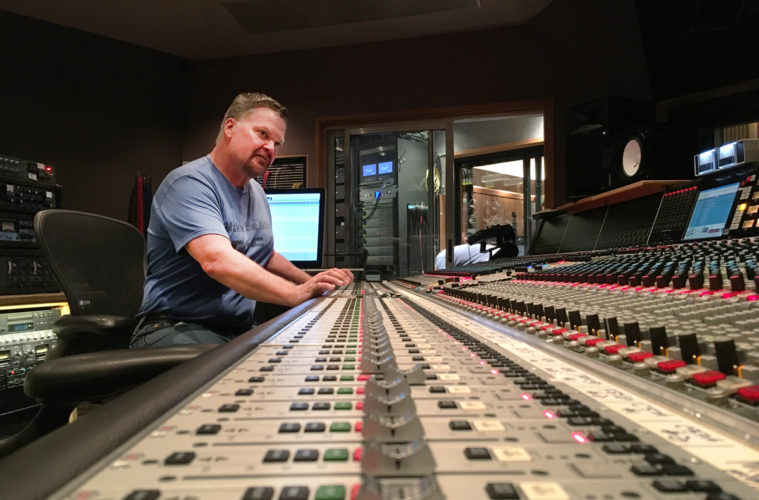 This might be one of the greatest radio imaging stories ever told. Such an iconic piece of production. Most of you don’t even need to hit the play button- you already hear it in your head. Imagers and Creative Directors, Program Directors, presenters/talent etc- You don’t have to be in the production field to idolize that ‘big, baddass Top of Hour’. Well- this is the ORIGINAL ‘big, badass Top of Hour’.

‘From the TOP TOP TOP TOP TOP TOP!!! …of the Empire State Building’… was originally From the top ‘…of the World Trade Center‘. The original producer: RICK ALLEN. It aired on Hot 103… which today, is known as Hot 97, New York. And it continued… every hour of every day, YEAR AFTER YEAR, back in the 80s and early 90s. When is the last time you heard of a TOH airing for six or so years?!

Check out the (true) story of one of the greatest imaging pieces ever produced from one of the most creative minds in the biz… the great RICK ALLEN. In Rick’s words: LOUD AND PROUD FROM THE TOP TOP TOP OF THE WORLD TRADE CENTER

First the innocent and happy thoughts: Even though I’ve tried and tried, I can’t for the life of me remember the exact date but for some strange reason I can still remember almost every detail of the night I put that ID together.  I think it was somewhere just before the summer of 1987.  We had just finished a recording session with Chuck Riley who, along with Eric Edwards, was the voice of HOT 103 (which later became HOT 97).  Joel Salkowitz was WQHT’s Program Director.  He asked for a new “top of the hour” ID using those new voice tracks.  He made it clear he wanted something special.

I remember taking the tape of the raw voice tracks home to my project studio at my home in Douglaston, Queens.  I had this little first floor apartment with stairs down to the basement.  I had set up my studio in that windowless damp basement.  It was cutting edge at the time, but when you consider the digital gear we work with today, it’s OK to laugh at what we called state of the art.  I had a Commodore 64 computer and a 5-inch floppy drive running a copy of one of the first MIDI sequencing programs, Passport’s Mastertracks Pro.  It controlled a Prophet 2000 hardware sampler.  There was an analog ARP Odyssey synthesizer, Juno 106 and Mini-Moog to create the effects.   It was all recorded onto multi-track analog tape at 15ips without the benefit of noise reduction. I walked into the studio that night to the creative pressure of producing audio that could stand out in a radio market that included guys like Scott Shannon and JR Nelson over at Z100. (Can you believe this was actually before Dave Foxx had started working in New York?!) I remember I found a little bit of courage from downing a couple of Bacardi and Cokes.  Then I looked at the script.  It was the line “From the top of the World Trade Center” that got me thinking.  It created a mental image of the broadcast signal rising all the way up the enormous height of the twin towers.  I began to search for the right effect to create just that mental image through audio and production.  One step at a time it began to come together.   I loaded the voice tracks into the sampler and started experimenting. With Chuck’s voice belting out “Top of the World Trade Center” spread across the notes of the keyboard, I pictured the station’s signal rising up One World Trade Center, all the way to the top of the antenna rising from its roof and started hitting keys, one after another, rising up the scale. Chuck’s voice rose in pitch with each note.  That was it… the beginning of the whole concept.  In the final version, the word “top” keeps rising in pitch as it repeats.  As the pitch rises the volume fades out.  Underneath it you can hear Chuck at his original pitch, repeating “top” on another track.  That track then finishes the phrase “top of the World Trade Center.”  A lot of people have tried to imitate the ID using stutter edits.  It never sounds quite right.  The technique that made it sound so different was layering several tracks of the voice and using different amounts of release-time setting on each track of the sampler.

The next morning, I took the final mix into the station and my PD came into the production studio to give it a listen.  It just so happened that Terry Greiger, Emmis’ corporate chief engineer, was in town from LA installing some gear in my studio that morning.  The ID boomed out of the speakers, but before Joel could say a word, Terry blurted out, “That thing is way over-produced.  It’ll burnout in a day.”  Fortunately, Joel didn’t think so and the ID made it on the air.  For years, Terry and I always started our conversations with Terry asking, “What are you up to?” And I always answered, “Nothing. Just sitting in the studio over-producing.”

I don’t remember how many years that ID ran but it was somewhere around 6 or 7 years in various forms on the station.  When Emmis switched WQHT’s signal from 103.5 to 97.1 in 1988, the transmitter site changed from the World Trade Center to the Empire State Building. The ID changed with it, but it was those iconic twin towers in downtown Manhattan that originally inspired the sonic concept of the ID. For so many years it was a blast for me to hear it copied on stations all over the country.  That is, right up until 9/11. One of my favorite script variations came from Scott Mahalick in the early 90’s.  He asked me to produce it for one of his stations that went, “From the top top top of a really tall tower with red blinking lights on top so planes don’t crash into it.”  It’s sad that the humor in his script forever changed, just like the lives of so many Americans, the morning of September 11th.   That morning, both of the original “towers” that were the spark that helped create that ID fell, thousands of innocent lives were lost and I was terribly angry that hatred from misguided religious fanatics could get inside my memories and steal the smile that Scott’s humorous version had always invoked.  A script that included the words “really tall tower” and “planes crashing” just wasn’t funny anymore.

My business and studios had moved to Scottsdale, Arizona by September 11, 2001, so I watched in horror from many miles away on the other side of the country.  I sat and stared blankly as the story unfolded on the national news. My disbelief morphed to anger, then to fear for all my friends back in New York.  It wasn’t until days later that I saw a picture showing rubble and an American flag defiantly rising from the remains of the antenna that used to broadcast to millions and millions of Americans from 110 stories above New York.  That antenna is now a lonely twisted tale of survival rising out of the rubble that sits on display in the 9/11 Memorial & Museum. I thought about the destruction and about that old radio station ID.  It suddenly struck me that the radio signal beaming out over the tri-state area from the “Top Top Top of the World Trade Center” had been silenced. The World Trade Center antenna on display at the 9/11 Memorial & Museum.

It hit me hard then, as it does now. I grieve for the loss of life.  I grieve for those who lost loved ones.  I struggle to understand how anyone, in the name of their God, could purposely cause harm to other human beings. But I also began to let go of some of that anger.  I let myself begin to feel differently when I thought of the towers.  Now I no longer think only of the loss and destruction.  I am now reminded that those towers are still a symbol of freedom for millions and one night back around 1987 they were also my creative inspiration for an iconic radio station ID.

(Feel free to comment on this story at the bottom of the page!)

The Top Top Top ID was originally produced by the award-winning radio legend Rick Allen over 30 years ago.  His credits now include radio stations in just about every part of the world and every format.  Not only a recognized leader in radio imaging, Rick now also produces sounds for companies like Disney, HBO, Cartoon Network, Nike, and Sony Pictures just to name a few.   Yet with all this recognition and experience, Rick still has a passion and love for radio imaging (He still produces the Absolute Imaging production service).  He is always available to talk and share ideas with radio people.  He personally answers emails and will actually pick up the phone if you call.