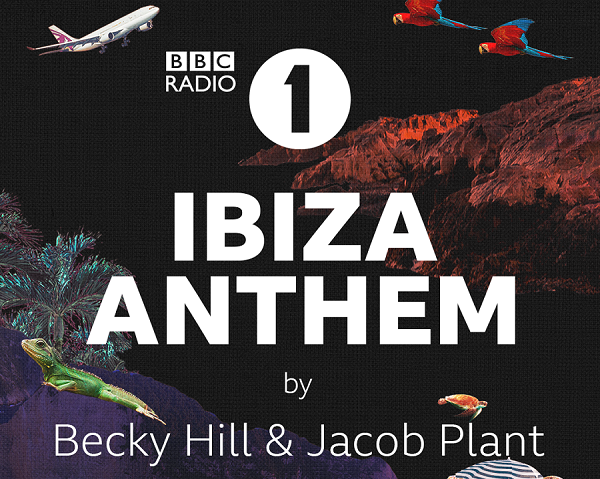 Part of my role at Radio 1 is to conceive creative ways to promote stuff, be that the launch of a breakfast show, a new competition, or a station event. So when the time came to promo Radio 1’s return to the White Isle of Ibiza for our annual dance event, I decided to approach it in an entirely new way.

I commissioned the creation of a dance track, one that would contain subtle references about the island. It would be a stand-alone hit record that could hold its own against the chart-topping artists on the Radio 1 playlist. It would be an exclusive song, a gift, a treat for our loyal listeners that would transport them to the Balearics and bring the sunshine of the island through their devices and out of their speakers. The track would be our way of talking about “Radio 1 in Ibiza”. It would be at the core of our campaign.

BUT before we could even make the song, it needed a home and a reason to exist. It had to develop from a seed before it hit the airwaves, and luckily for me, there was already a golden opportunity waiting to be exploited. This opportunity came in the form of a show called Dance Anthems. Back in November when our presenter MistaJam took over the show, I commissioned him some ‘Theme Music’, a ‘Talk-Over Bed’ that would be exclusive to his programme. To make this we naturally approached a UK dance producer, and in this case, it was the super talented Jacob Plant. He subsequently nailed the brief and gave me a music bed of outstanding commercial quality.

Several months later, MistaJams team mentioned that the bed had attracted the attention of the listeners. In short, people listening to the show LOVED IT. Jams crew joked that I should “turn it into a song!”. That ‘joke’ was the golden opportunity, the excuse, the seed, that would kick-start my Ibiza campaign.

Instantly I said, “Let’s do it…”. I looked to the horizon where our Ibiza Weekend was looming, and it made perfect sense that Dance Anthems should be the birthplace of ‘Radio 1’s Ibiza Anthem’. The Radio 1 music team tipped me off with a list of artists that would be performing on this years Ibiza line-up. Within that list was the incredibly gifted Becky Hill. She was the perfect choice to top-line a vocal over our instrumental. MistaJam reached out and incredibly she agreed to be our singer. Fast forward 2 months and we had a song. It wasn’t that easy of course, it took hundreds of emails with 3 publishers, 3 composers, 2 major record labels, record pluggers, artist managers and of course all of the teams at Radio 1, but we got there just a few days before it was due to premiere.

After weeks of teasing the development of the song on-air, the final track was played in full by MistaJam on his Saturday afternoon Dance Anthems show:

From that point it was turned into ‘Tagged Tracks’, branded as a ‘Power Intro’, edited into ‘Trails’ promoting our Ibiza weekend, it worked its way into all of the Ibiza ‘Idents’ and ‘Top Of Hours’:

Presenter and DJ, Danny Howard even whipped up a deep dub style remix for his Friday night dance show:

It finally ended up becoming the Event Openers that would be played on the radio and on-stage in front of nearly eight thousand people at Cafe Mambo.

The song became so popular with our audience it was made ‘Tune of the Weekend’, and outperformed most of the other Radio 1 playlist tunes. It became so well received that it ended up topping the chart. It reached the Number 1 spot in the UK Shazam Dance Chart, Number 4 in the Future Hits Chart, and astonishingly Number 8 in the whole of the UK Shazam Top 200.

To round off the campaign, Becky Hill performed the song live and acoustically on a speedboat in Ibiza. This was filmed and turned into a highlights video to celebrate Radio 1’s iconic weekend in Ibiza.